If you ask a native Oklahoman where they were on April 19th, 1995, most can tell you… within a matter of seconds. The day Oklahoma City’s Alfred P. Murrah building was bombed is a day many Oklahoman’s can’t forget. The city and it’s community will forever be changed. We will always remember the moments before, and the moments after.

The blast was felt for miles around. Billows of smoke in the shape of mushroom clouds hung over the building contrasting with the beautiful blue Oklahoma sky. Dusty air from the cemented clouds emerged from rubble as paper floated in the air. Cars were on fire, glass was glistening against the tarred streets and terror rested on the faces of those that managed to escape the destruction. No one knew what exactly happened and trying to save lives became many persons first and only priority.

Categorized as the worst act of Domestic Terrorism carried out by a U.S. citizen in the History of America on American soil made this catastrophic scene not only a recovery scene… but also, a crime scene. In this episode, you will hear stories and details from first responders like Oklahoma City Police Department’s then Sgt. (Lt.) Bruce Davis, Trey Davis a KTOK reporter, and Jon Hansen, the assistant fire chief. 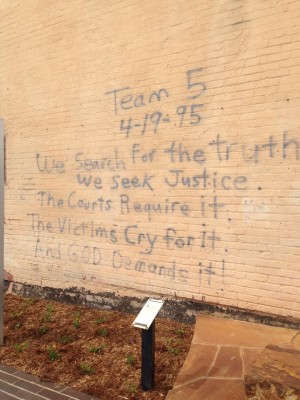 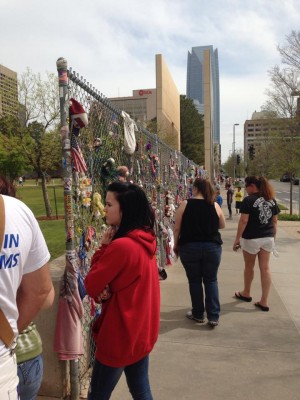 Visitors reflect at the Oklahoma City National Memorial and Museum. 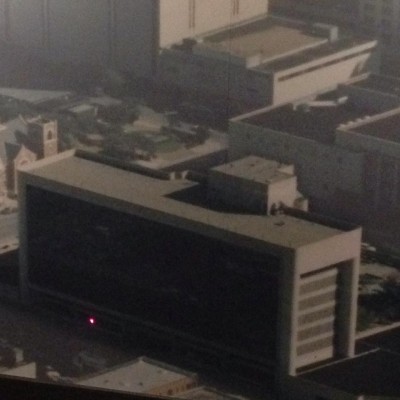 An image of the Alfred P. Murrah Building before the blast. 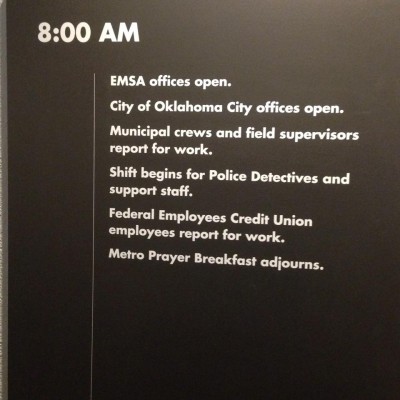 This is a mounting on the wall details the activities an hour prior to the blast. 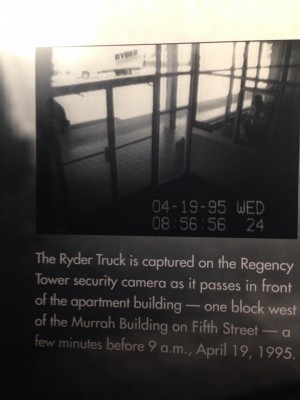 This is an image of the Ryder Truck used by Timothy McVeigh to ignite the blast was caught on video. 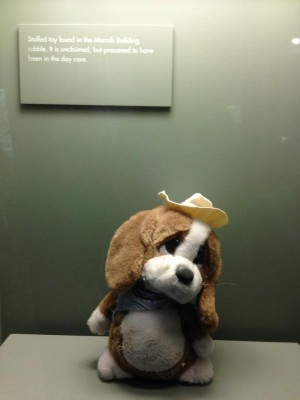 A small teddy bear was found in the rubble. 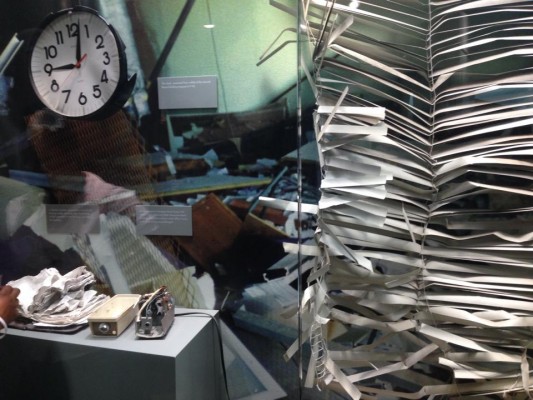 The remains of an office are kept after the blast. 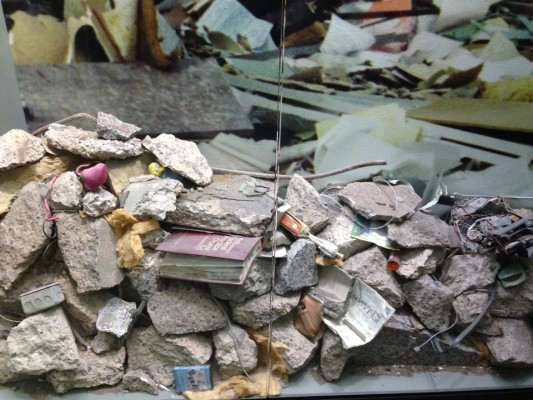 A display is shown of rubble, books and paper. 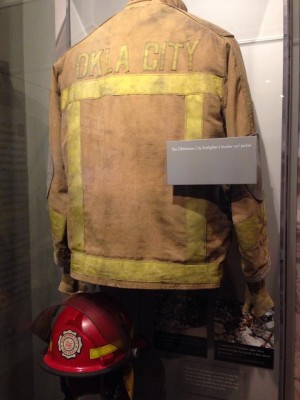 An Oklahoma City Fire Department Jacket is on display. 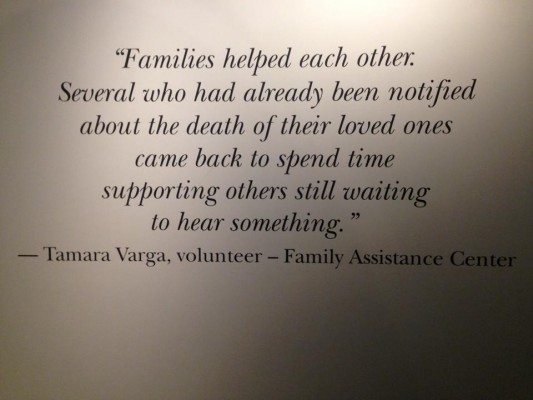 A quote from a volunteer reflects support. 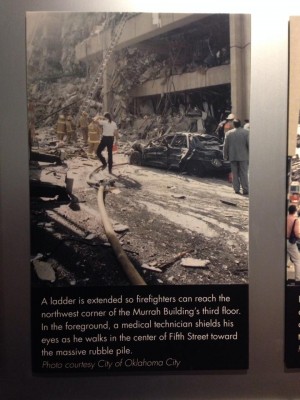 This is a telling image captured after the blast. 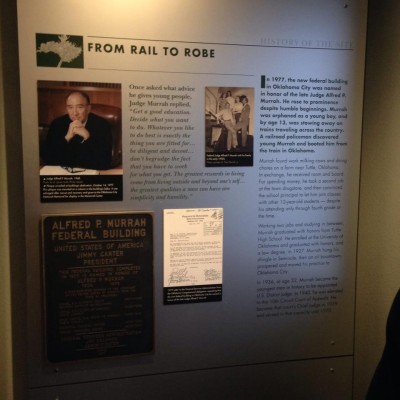 A descriptive wall tells of the building’s name sake.

Our special music is “Annie’s Song”, composed and performed by Drew Faulkner, a student at Northwestern Oklahoma State University. Piano and orchestration arranged and performed by Ken Sarkey, and recorded at Cornerstone Recording Co., Edmond, Oklahoma.

A number of guests were Interviewed in this episode; some we hear from briefly now, but will hear more of their account in upcoming episodes.

Christy Sarkey
Sergeant – Edmond Oklahoma Police Dept., formerly with the FBI and Bomb Squad Member, she was a College Student in 1995.

Phil Bacharach
Journalist/writer for the Oklahoma Gazette, author of “The McVeigh Letters” for Esquire Magazine.

*A Note from producer Ken Sarkey:

While working on the first episode of our Real Mysteries podcast series, “Annie’s Song” came to mind as I considered music appropriate for inclusion. It was written in 2013 by a then 20 year old Drew Faulkner, who sent me a demo to listen to and help him with a professional arrangement and recording. I had previously had the pleasure of recording Drew’s beautiful singing voice, and he comes from a very talented and creative musical family. On the very day we released the premier “We Will Always Remember” podcast that closed with “Annie’s Song”, Drew’s father was recovering from cancer surgery in Oklahoma City, and my wife and I played it for him during our visit to the hospital that evening.

For one as young as he, Drew seemed to have a special ability to convey the complex emotional message of one who is suffering in ways most people cannot understand unless they too have experienced it. But as I listened to “Annie’s Song” in light of the 1995 Oklahoma City Bombing tragedy, the deep, sensitive lyrics seemed to apply in a way he probably hadn’t thought of:
“The walls are closing in, and I am done. I just don’t have any strength left to keep pushing on…”

On April 19, 1995, in an instant, the walls of the Murrah federal building were shaken apart, along with the lives of those inside, and those who would rush to their rescue and recovery. It would require a lot of strength to work through the healing process; physically, mentally, and emotionally. It takes time, too.

We are coming up on the mark of twenty years since that horrific event, and as we have interviewed many who were involved first hand, we see and feel those emotions still lingering. We pray for continued restoration as you cast all your cares on the One who cares for you.

I began writing “Annie’s Song” in the spring of 2013 and wasn’t satisfied with it until that fall. It was at that time that I contacted Ken Sarkey at Cornerstone Recording Co. in Edmond, Oklahoma, to see about arranging and producing the song. He worked on it for months. He would send me a version of the song, and I would give him any ideas I had for adjustments via email. We corresponded that way until the summer of 2014, when he sent me the final product. I was blown away when I listened to it for the first time.

The inspiration for “Annie’s Song” came from the mother of one of my friends. At the time, she was battling cancer, and her case was not a good one. However, she’d decided she was going to be positive, and would post about her daily life on Facebook to encourage people. One of these posts not only sparked my imagination and inspired me to write a song, but also struck me to the core and changed me forever.

It wasn’t the post itself, but a comment that caused this epiphany. Person after person had commented with words of encouragement, which is crucial in a situation such as hers. However, she had learned something even more important than believing she would beat cancer, and I was about to discover it in one of her replies.

I can’t remember what her exact words were, but I can tell you what I took away from it. From what she said, I got, “I might not survive this, but God is still good even if I don’t.” When I processed what she said, my jaw dropped. It was at this moment that I discovered what true faith looks like. True faith doesn’t depend on outcomes to be strong, it just IS. True faith believes that God IS good, no matter what your eyes see, or what your mind, or sometimes even your heart, tries to tell you.

It was then that I began to imagine what she thought, said, or felt when nobody was around. I started to try to picture the dark battles she had to fight against herself: against any fear, pain, sorrow, doubt, anger, hatred, or even self-resentment. I imagined that huge war, and all of the weariness that must come with it.

And then I thought about the reality of her victory. She was not cancer free, and didn’t know yet what would happen to her in the end, but when she decided to have unconditional faith, she had already won. When she could have given in to fear, she decided instead to acknowledge the reality of what she was facing and be an encouragement to others in the middle of it all. Even if it turned out that she wasn’t going to be around for much longer, she decided that she was going to use the time that God gave to her; that while she was still alive, she was going to live.

I used all of those thoughts and emotions, along with a Bible verse, to write this song. I wrote it as a gift to a stranger, who is now my cancer-free friend, for inspiring me the way she did. And I hope for it to touch many more hearts than just hers. I want it to inspire hope in seemingly hopeless situations everywhere. More than anything, though, I want it to point to the reality of what God can do for people, because that’s where true hope comes from. The quote from Psalms says, “… Weeping may endure for a night, but joy cometh in the morning.” So when you see the sun hanging up in the sky after a dark night, let yourself feel joy. Choose, like my friend did, to have unconditional faith, and say, “Today I am alive.”

2 thoughts on ““We Will Always Remember” Episode 1”